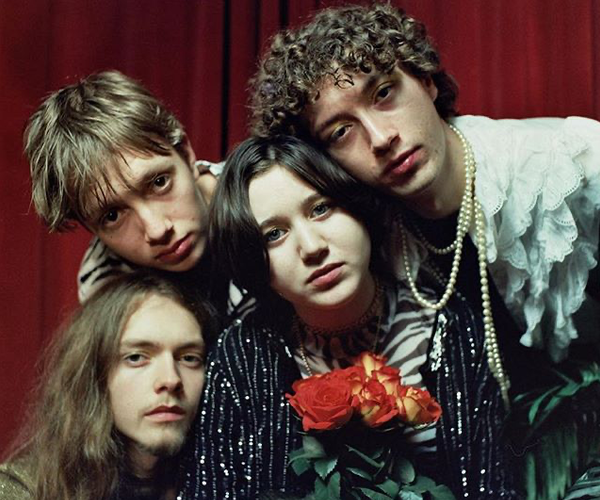 How did ``CherryTight`` come together?

“Cherrytight” came out of a jam in one of our first ever practices in 2017. I [Casper, lead vocals] had a poem which I had written almost a year before the band had formed, which was a metaphor for the AIDS crisis in the 80s. The lyrics aren’t obviously connected with the meaning behind the song for most, which is justified as it’s a poem and a metaphor, not really something made to be straight forward; but at the time which I wrote them, I envisioned underground taboo scenes of our society deemed filthy and immoral to the public eye (such as gambling, brothels, substance abuse, etc) and translated that into how the crisis which was an epidemic and a tragedy in the queer community had been twisted by the media (and therefore our society as whole) to drive their bigoted views of gay, bisexual and trans people and promote a fear and of what they interpreted as “the gay disease”. Apathetically, to some, AIDS and HIV was not a tragedy, but something which could further “justify” their opinions of queer people being filthy and taboo.

I began turning the poem, quite spontaneously, into a melody as the band jammed and that simple post-punk inspired vocal melody and bass line combined with the flange guitar eventually became what is now “Cherrytight”.

We chose “Cherrytight” to be our debut single not only because of how long the song has been part of TELGATE but also because it encompasses who we are. We are queer activists who will not be silenced.

The basis of TELGATE is to empower individualism and empowering the people who listen to our music and come to our shows to stand up for who they are unapologetically and fight for what they believe in through art and activism. And nothing makes us happier than the feedback we receive off of queer people who have attended our shows and felt that empowerment to come out or do the things they wanted to do. Myself [Casper] being a non-conforming Trans Male, I am fully aware of the struggle trans people have for role models in music. We want to create a space where queer people feel inspired to create and do the things they love free of shame and oppression, and allow trans people of the future to grow up feeling like they have people to look up to like themselves and that they are not destined for failure and isolation. Trans lives matter and deserve to be seen as equal and strong humans, and fully able to be stories of success.

We also use our music to speak about less-spoken-of mental health issues such as psychosis which has had a great impact on my life, and autism.

The official Cherrytight Music Video will be released in the beginning of the year, a music video filmed in a working men’s club in Ferndale (Located in the Rhondda Valley where many of our families were raised.) We also have plans to release our second single in the coming year and will be joining Zee (formerly Queen Zee) in Le Pub, Newport on February 6th for a fierce night of queer punk, glam and spoken word, also expect to catch us in London in April TBA and we are currently in the planning of putting on an array of queer showcases around Cardiff.

A new song from another artist we can’t get out of our heads right now is “Jungle Fever” by CVC. Big up Cardiff. Also, “Circles” by Post Malone, no guilt here. Jay (Bassist) says he’s loving Diana Ross’s “Upside Down”; not so new but definitely a killer track.

It would be an honour to work with the Jim Henson company in the future on a music video or alike. It would also be incredible to work with animator Einar Baldvin on a project as his artwork is so emotive and controversial, which are features we admire most of in art and performance. As for musicians? Let’s shoot high, we’ll take Brian Ferry…And Courtney Love for that fierce attitude. No compromises.

Following the words of Marc Bolan, I danced myself right out the womb and I’m sure I’ll dance myself into the tomb. Music, writing and performance has always been the key part of my life and the most precious part of my life. Before I could talk I hummed and when I could talk I would sit on my swing in my back garden and make up songs until my mum called me inside. I taught myself to play chords on my guitar around the age of eight or nine and began writing my own songs, which quickly became a coping mechanism for my trauma and intense emotions. I wrote music to avoid doing harm to myself as a child experiencing intense depressive and self-destructive tendencies and eventually when I began to experience psychosis – I wrote because I was too scared not to. It’s really something that has (as cliché as it sounds) saved me and helped me grow as a person. God knows where I’d be, if even alive, without it and I’m so thankful to be in a position where I can help others find hope and empowerment through music too.

The lyrics I connect with most are the lyrics which our song “Home Is Where The Rat Is” is based around. Those lyrics are:

The lyrics describe a long lasting symptom of my psychosis which was the delusion that I was from another world – the world where the creatures that I hallucinated where from. In intense psychotic episodes I would say I wanted to go home, and this “other world” was the home I spoke of. The creatures that I experienced are written into these lyrics – the rat king, the shadow, the joint less creatures – and are something that has inspired so many of our songs and my personal art. So this song (Home is where the rat is) and especially this line of it, really pays recognition to them and gives an insight into what is behind the lyrics to many of our other songs.