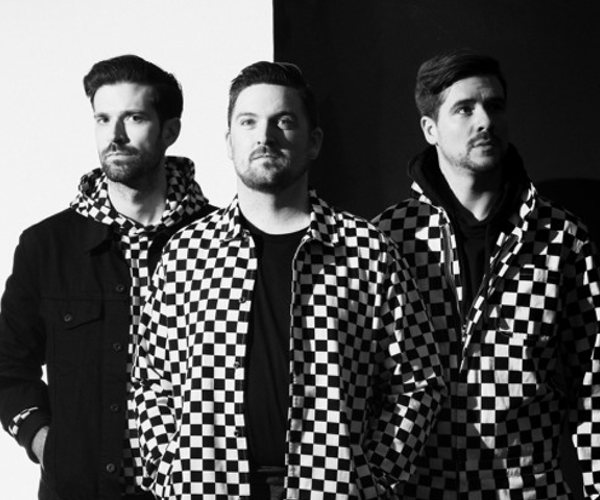 Daniel Ellsworth & The Great Lakes has truly one of our favorite singles of 2019 in “Way You Are”. The band ushered in a new era, now as a trio and introducing three new songs in 2019. They’re back in the studio working on more music for 2020. Check out our interview with the guys below and be on the look out for the band featured in our upcoming video coverage!

An interview with Daniel Ellsworth + The Great Lakes

“‘Way You Are’ was the first single that we put out in 2019 which was sort of an in-between year for us. I was moving out here to L.A. for a little bit but we weren’t on the road because we had just come off of a year of putting out a record and touring in 2018 and some things changed in the band and we were kind of figuring out what the next thing was. We started writing and producing some songs just completely on our own and recording them on our own which was something we hadn’t done before and ‘Way You Are’ sort of stemmed from that.

I was messing around with a bunch of ideas in the studio and it all just kind of came together and Marshall and Timon came in and played parts on it and I was writing a song with a dear friend Ruby Amanfu and she heard the track and was like ‘please let me sing on this’ and I was like ‘you can sing on whatever you want, you’re amazing’ and so Ruby sang on it which was incredible and another friend Nick Sainato of the band Nightly played drums on it and just all kind of came together in a new and different way than we’d ever recorded before and and then of course with our dear friend Kyle Andrews we tracked drums and mixed to the track and it was just sort of this this new way of recording. We usually had gone into a studio just the full band and then tracked everything live and this was sort of the first song that we did differently.”

“’Step Away’ stemmed from a week long session with the band holed up in my studio in Nashville and we were just trying to do something completely different for us and in the case of that song we started with just a drum loop like an incredibly simple drum loop and limited ourselves to just a handful of chords in the song and did something a much slower tempo than we typically do and just sort of trying to get out of our usual headspace with the bands now being three of us. We were sort of having to rethink how we do everything how we write as a band and so that’s sort of how step away was written just all in one sitting.

“‘Out Alive’ is the third single of three we put out in 2020. It was another one that we self produced. We recorded it all in my studio in Nashville. I mixed it. We were on tour in Ohio which is where Marshall is from and holed up in his basement and did a bunch of writing. Our good friend Nick who’s an amazing drummer and helped write some of these songs and “Out Alive” was one of those songs so and that was cool because it was writing with someone new who brought different ideas. More of these songs will be coming out in 2020.

I wrote the lyrics about a friend who’s struggling with addictions and some other things and just how you’re gonna pull through because you know, I believe that you will, and you’re gonna come out alive. I think in a broader sense thinking about it in terms of the state of the world right now. In the state of our country and feeling hit over the head with negativity every day in the news and trying to take all that and put an optimistic spin on that which can be difficult for people to do but I think it’s needed in art and music.”

“Right now we’re spread out over the country, I’m here in Los Angeles, Timon is in our hometown of Nashville, Marshall is in Columbus, Ohio. We’re writing for a new EP or album. So mid part of 2020 to the back half of the year depending on how things progress with our songs that’s what we have loosely tentative for 2020. Maybe EP, maybe an album, definitely new shows. 2019 was bridging the gap between craziness in the band and figuring out what’s next and 2020 will be the release of that.”

I can’t speak for everybody in the band but for me the my most played album was probably ‘This Is How You Smile’ by Helado Negro. It’s is an amazing album top to bottom. it’s such a vibe with beautiful, uplifting songs and just the record that I needed in 2019. Kota The Friend ‘FOTO’, Boom Forest ‘Hard Times, Anything Helps’, Clairo, Anderson .Paak, Cage The Elephant and our friends Airpark who put out an album ‘Songs of Airpark’ so amazing.

“That’s a big question….It has been the biggest part of my life since as far back as I can remember. I grew up in an incredibly musical family. Everybody played guitar or piano. Uncle’s played guitar or piano and everybody sang and it was sort of like the Von Trapp family and we were always around it in theatre musicals, and choirs. It’s been part of my life and for so long and I went to college to study piano. I think it’s it’s the thing that keeps me going, keeps me grounded, it’s the place that I can turn to when I need to express thoughts that I have inside. It’s the thing that I have the most fun doing.”